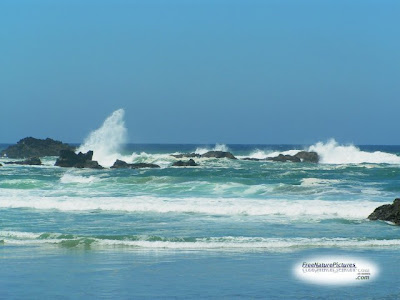 Cue the Muzak while I put the blog world on hold for a little while...
Posted by Just B at 7:23 PM 3 comments:

Ode to Darcie and Duran Duran 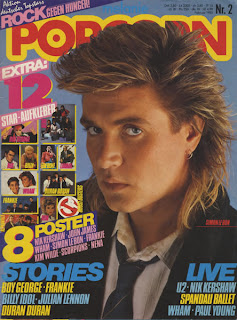 Two things happened recently to put in an 1980's frame of mind. This week The Bean had this great blast from the past post about a Duran Duran concert. The other thing is a phone conversation I recently had with one of my best friends from high school, Darcie, a.k.a. Mrs. Simon Le Bon. Darcie is very lucky that all my pictures from high school are still packed away in Connecticut, or I would be able to show the blog world how she had the exact same haircut as the one Simon is sporting here on the cover of Popcorn.

It was great to catch up with Darcie, something we only manage to do about once a year. But despite the lack of actual contact, I always feel a very close connection with Darcie. Maybe because I met my husband at her wedding, but I think it's more because she was one of the few people who really got me in high school. That's not to say I didn't have friends who loved me, friends I still hold dear. But Darcie understood me and loved me anyway. I could always be myself when I was with her--no small feat in high school.

Darcie started her own branding business (don't think cattle) a few years back. Now she works exclusively with one famous chef, hobnobbing with Hollywood types and hanging out in Green Rooms. And while she has been a single mom for a long time, wiping her fair share of noses and butts, I don't think our current lives remotely resemble each other. I will not be skiing in Aspen this year with any famous chef's families.

It was so great to catch up with Darcie and I am so, so proud of all her hard work. But I also giggle everytime I think of her and her Simon Le Bon haircut. Seriously, it was the exact same haircut.
Posted by Just B at 5:00 AM 6 comments:

What I Want To Be When I Grow Up 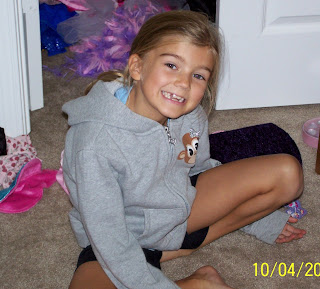 I don't devote whole posts specifically to my girls often for many reasons. I haven't written much about my Biggest in particular because in some ways she is sacred ground to me. She is such a funny combination of character traits and gene compilation, mere words don't seem to do her justice.

At age 8, she loves math and science, yet she asked for an art set for Christmas because she wants to be an animator when she grows up. She laughs at all my lame jokes. She laughs often and with heart. She plays with her little sisters, calling Middlest her best friend. She can amuse herself for hours. She doesn't given up, although she can be easily frustrated. But eventually she tries again and again, until she succeeds.

When she was nine months old she stopped growing. Failure to thrive, the doctors called it, as it stretched into 12 months and 18 months. Every test was performed, every specialist was seen. She was tiny, weighing less than 18 pounds on her second birthday. But she was thriving, answering doctors questions in complete sentences. And slowly she made her way back onto the growth charts and we made our way out of that dark and confusing time that lacked answers, but was full of miracles.

We call her the Diplomat because she always tries to be fair to both sides. Which one is your favorite? her dad always wants to know. Both, she always answers. Both friends, both toys, both characters, both moments.

She has played and loved soccer since she was three. She has a plan. She plans to play soccer all through school, maybe even in college, maybe even professionally. Maybe the Olympics. Then she will be an animator. Or a teacher. Or an art teacher and soccer coach.

I know she is only eight and the long road ahead only get harder. But I think this one is going to be okay. She may not always laugh at all my lame jokes, but I will always be her biggest fan.
Posted by Just B at 4:37 AM 4 comments:

some Thoughts on books

I am currently reading The God of Small Things by Arundhati Roy for work. Roy likes to capitalize certain words for Emphasis and now I strangely find myself thinking Random Thoughts with capital letters. (I do this when I read, take on the author's writing style for all thoughts in My Brain). I'm not sure what I would think of this book if I was Just Reading it for pleasure. The story is strange, somehow simultaneously Vulgar and Beautiful.

The last few books I have read for work have all had Bengali origins, though I didn't do this necessarily On Purpose. Before the Roy novel I read Banker to the Poor, which is the autobiography of micro-credit guru Muhammad Yunus. His lending to the poor had a profound effect on poverty in Bangladesh, as well as other places where his bank model has been replicated. With the mess of our stalwart American banking system I have to believe he has a point: Capitalism for Greed's Sake serves no one, not even the greedy capitalist. Capitalism for the promotion of Better Lives can be a positive, transforming tool.

I also did a lesson plan for The Interpreter of Maladies, the Pulitzer winning collection of short stories by Jhumpa Lahiri. I have to say I liked her second story collection better, Unacustomed Earth. Her stories were so beautifully, Profoundly Simple.

Some things--like poverty, aspirations, tragedy, motherhood--Transcend Culture.
Posted by Just B at 11:55 AM 5 comments:

Okay, I can't get The Graduate out of my head. Pseudonymous mentioned the water imagery in her comment and now I am curious about that. The pool scenes are great. Did you know that The Bee Movie (animated Jerry Seinfeld) does a take on a pool scene from The Graduate? Very clever.

But what is all Mrs. Robinson's anger about? She is really, really angry. Does she love Ben? What was he to her? Why is Elaine interested in him after she knows he slept with her mother? That might be a deal breaker for me.

And the last scene on the bus: Are they sorry they ran away with each other?

Any and all thoughts are welcome!
Posted by Just B at 11:26 AM 2 comments:

We watched The Graduate last night, which I don't think I'd ever seen in it's entirety before. I liked it--all that what-to-do-with-my-life-especially-now-that-I've-slept-with-someone's-mother angst ...until it dawned on me that I am roughly the same age as Mrs. Robinson. Yikes!!!
Posted by Just B at 5:42 AM 5 comments:

January kicked my butt. It was a long month. I limped to the end with aches and pains everywhere, feeling old and feeble. There were many reasons for this--husband working 80 hour weeks, family obligations, increased work load, etc--but I felt it more than usual this time. I felt OLD.

Monday night I dragged my tired, 40 year old butt to book group, grumbling to myself about my exhausting-never-feel-caught-up lot in life. I got a glass of wine and joined a group of women chatting before the book discussion got underway. One of the women had just returned to book group after being out of it for several months, so we had not met before. This particular group has been going for over six years, but I joined about six months ago.

Robin was catching the other members up on the status of her paraplegic husband who had undergone extensive surgery to put rods in his back a month ago. Except both rods had broken. She matter-of-factly explained that they were devastated by this turn of events because the rods were supposed to allow him greater stability. He had even lined up a series of interviews and the family was looking foward to a "normal" life. Now they were back to square one and the broken rods had damaged tissue and caused a massive infection. This woman was kind and warm and quietly noble.

I turned off the little violens and whimpering voices in my head. I am tired. My body is aging. I do feel overwhelmed. And I am so, so grateful.
Posted by Just B at 11:44 AM 4 comments:

Six more weeks? If only! 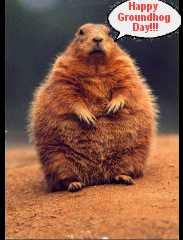 I'm a big fan of Groundhog Day. I like to think that someone out there has some kind of answers, and it stands to reason that a creature who spends so much time underground would be tapped into some kind of earthy wisdom.

But this year, I don't really care if there are six more weeks of winter--winters here in Texas are not so bad. What I really need to know the groundhog can't tell me. I need reassurance and facts far beyond the weather. So, unless he is coming over to do a few loads of laundry or cook dinner or put a bunch of bankers in jail, I don't find him particularly helpful this year.