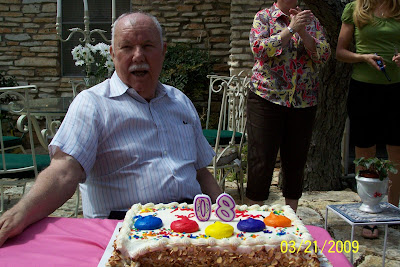 My dad celebrated his 80th Birthday this past weekend. That's him sitting in front of the cake as "Happy Birthday" is being sung. That's my oldest sister and me standing in the background, ready to swoop in and cut pieces of cake to pass out to the fifty or so members of the family that showed up for this tw0-day bash.

It was exactly the way my dad wanted it to be. On Friday night he sat around with his children and siblings making jokes and telling old stories. The weather was perfect, the barbecue was delicious and abundant, the jokes were as lame as ever and the stories had been told many times. A better evening could not have been scripted. Even my mother was on her very best behavior. 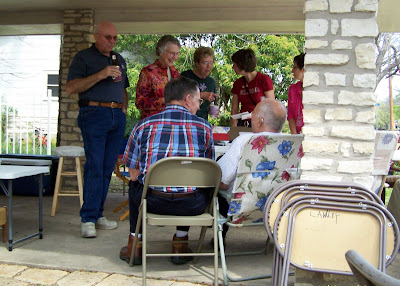 The party took place in my parents' front yard and most of the action was here under the carport. That's my dad holding court with his brother (standing) and his sisters and one of his brothers-in-law. People drove from California, Oklahoma, Arkansas, Kansas, and all parts of Texas. Others flew in from Colorado, Washington and San Francisco. As Dad said, "I'm tickled and humbled to have so many people come from so far to celebrate with me."

On Saturday all my mom's sisters and their families joined the party. It was something to see my girls running around the yard and playing games with their second cousins, just like me and my cousins did at my grandparents farm in Oklahoma. And it was the farm stories that I liked to hear best. The continuity and stability of that life is most striking. It's been almost sixty years since my dad left the farm and headed to the northwest to become a logger. Despite somehow ending up in college and then seminary and becoming a minister in Idaho, Washington, Oklahoma, Colorado, Hawaii and eventually Texas, it is the years on the farm that still loom large in his memory.

Dad gave us quite a health scare last spring, but as you can see in the pictures he is doing very well now. In the last year both my parents have started to show the years and suffer the inevitable consequences of aging. There was a poignancy to this gathering, an unspoken need to celebrate before...before the next gathering is for a far different reason. Happy Birthday, Dad, and please know that I am far from being done with listening to the lame jokes and the old stories.
Posted by Just B at 4:54 AM

that's a great post. and what a tribute to your dad that so many people came so far to help celebrate : )

What a lovely tribute. You are so fortunate to have a big family like that. Your dad looks great ; -)

only a movie said...

I love this post. I love to hear about big family gatherings. The photos are great too. I bet your girls had a blast and will remember this when they are adults.

I love family gatherings! Sounds like a great party.